House Passed the Build Back Better (BBB) Act: What does this mean for immigration?

On November 19, 2021, the House of Representatives passed the BBB Act by a vote of 220-213. All eyes are on the Senate for their consideration. The Senate is expected to begin deliberations in early December and vote before the holidays.

BBB would authorize the Department of Homeland Security (DHS) to temporarily provide legal status to any noncitizen in the United States, also known as parole. This includes both undocumented immigrants and legal temporary workers and their families who meet the bill’s eligibility criteria. Eligible candidates include those who have continuously resided in the U.S. before January 1, 2011. For naturalization purposes, “continuous residence” means that the applicant has maintained residence within the U.S. for at least five years before applying or resided continuously in the U.S. for three years in the case of qualified spouses of U.S. citizens. Anyone establishing residence after December 31, 2010 will be ineligible for temporary legal status.

DHS will begin accepting applications within 180 days after the date of enactment of the BBB Act. Thus, if the BBB Act were enacted on January 1, 2022, the first applications could be received by July 1, 2022.

So what exactly are the immigration benefits of the BBB Act?

Under this program, parolees would receive legal status and work authorization for the duration of the program. Individuals would be allowed to apply for state driver’s licenses. Anyone who is married to a U.S. citizen, the parent of an adult U.S. citizen, or the minor child of a U.S. citizen could immediately adjust their status to legal permanent residence after receiving parole because this status essentially removes the illegal entry bar to adjusting to permanent residence.

What about employment-based green cards?

With this new immigration framework comes additional fees and changes to the current fee schedule, which is illustrated in the diagram below. 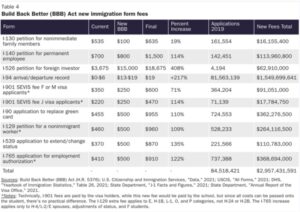 As we hope the BBB Act pushes through final approval in the Senate, we will continue to monitor the legislative development and provide updates in the future.